To commemorate ten years since Buffy The Vampire Slayer’s television series end, Naomi Alderman of the BBC’s Radio 4 hosted a special on the series. She interviewed show creator Joss Whedon, Anthony Head (Giles), and series fan Neil Gaiman. Alderman also wrote a corresponding piece, Buffy the Vampire Slayer: The Legacy of a Teen Heroine, that appeared on BBC News, in which she says Buffy “still feels ahead of its time in its portrayal of women characters.” During his interview, Whedon weighed in on the matter:

“The self-actualised female who was in charge of things didn’t land quite as solidly…. I, too, have been somewhat disappointed… it feels almost like a backlash – we want to inoculate ourselves against this by giving you everything [Buffy] had without the feminism.”

Previously on FANgirl, I’ve connected the decline of the portrayal of female characters into the post-Buffy era and have stated that some fans, especially women, have felt that storytelling had taken a passive-aggressive stance against positive female characters. The Year of the Fangirl – 2013 – featured some remarkable shifts in the entertainment industry. But as Alderman notes, for the most part women are not portrayed as part of a team, which was a core reason the decade-old show worked:

So often now, a “strong woman” in a TV show or a movie will be almost entirely isolated from other women – from Katniss Everdene trying to survive the Hunger Games to Sandra Bullock’s character in Gravity, from Carrie Mathison in Homeland to Daenerys Targaryan in Game of Thrones – female friendship, let alone having conversations with several women, seems utterly impossible for many of today’s female characters. 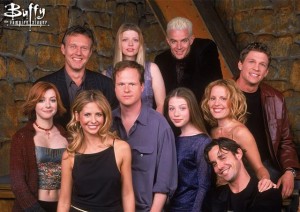 I have been telling my own stories in prose for over a decade, and without a doubt teamwork has been a key component of my narrative style and also responsible for much of my fandom success. It was so important to me to portray women working together that I made sure to create several scenes that highlighted this type of teamwork in my novel Wynde. When a person is thinking about it, they often write about it. Over the past two years, several examples of my thoughts on teamwork have popped up on the blog. A beta-reader for Wynde noted that the closing chapters had a vibe that reminded her of The Avengers. Really, though, what I was going for was a Scooby Gang tone to close the book, which is what Whedon built upon to create his blockbuster superhero movie’s ending. Buffy or Avengers, though – either way, I’ll take it.

Finally, Neil Gaiman might not have worked on Buffy, but he was easily able to verbalize to Alderman how to create good female characters (via The Mary Sue):

“I think the big thing to point out to people is, you know, possibly they should go and hang around with some women. And also, it’s worth pointing out that people, unfortunately, misunderstand the phrase ‘strong women.’ The glory of Buffy is it was filled with strong women. Only one of those strong women had supernatural strength and an awful lot of sharpened stakes. And people sort of go ‘Well yes, of course Buffy was a strong woman. She could kick her way through a door.’ And you go ‘No, well that’s not actually what makes her a strong woman! You’re missing the point.’”