This weekend I had the pleasure of recording an episode of RebelForce Radio’s Clone Wars Declassified with host Jason Swank and guests Paul Bateman and Grant Gould. 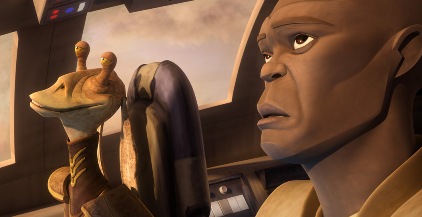 Our discussion focused on the two-part arc “The Disappeared” from The Lost Missions, better known as the Mace/Jar Jar episode. Considering no one on the panel seemed to be big fans of either character, we all enjoyed the space adventure tone and the interaction between the pair.

Written by Jonathan Rinzler, author of The Making of books and The Star Wars comic, the episodes are heavy homages to Indiana Jones, particularly the second movie. The Bardottans, who passively use the Force, present an alternate approach to the Force as compared to the Jedi warrior. The Bardottans appear to not have hang-ups with expressions of love and experiencing romance. (I’ve been asking for more romance in Star Wars, but I never imagined in my wildest dreams it come by way of Jar Jar.) Queen Julia summons Senate representative Jar Jar Binks to Bardotta to help unravel the mystery behind the disappearance of their spiritual leaders. Mace accompanies Jar Jar, despite the Bardottan request that the Gungan come alone. Many interesting character developments unfold through the shared adventure, including some new found respect from the Jedi leader for the Gungan misfit.

According to Dave Filoni in his recent interview with RFR, the story pitch had originally been for Count Dooku to be the mastermind behind the villainous plot. Mother Talzin’s inclusion makes the tale far more interesting because it subverts expectations. 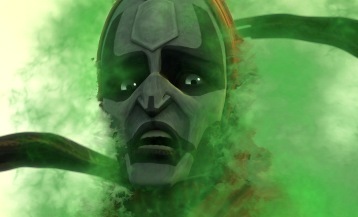 Talzin and the Nightsisters have played an interesting role in television show by revealing different kinds of mysticism in the galaxy far, far away. Their home planet of Dathomir was introduced in the Expanded Universe novel The Courtship of Princess Leia. The Nightsisters arc of The Clone Wars, written by Katie Lucas, fleshed out considerably more lore while staying true to much of what had come before in the Expanded Universe. Witches and fairies – Mother Talzin actually presents elements of both archetypes – have been integral in literature from fairy tales, Arthurian legend, and right into modern day shows like Buffy the Vampire Slayer and Sleepy Hollow. In real world history, female witches have often been hunted down out of fear, generally fear from patriarchal society.

Mother Talzin’s quest in this episode is to become the most powerful being in the galaxy by harnessing Queen Julia’s life essence. We’re told magick is just an illusion as Mace and Talzin duel. The Queen is rescued and Talzin disappears into a green mist. The question remains, did she create the illusion that Mace Windu wanted, or did he really win?

Personally, I imagine this isn’t the last we will see in Star Wars of Mother Talzin or Nightsister Asajj Ventress. For those who worry about the Expanded Universe, the Nightsister stories in The Clone Wars have moved a good chunk of EU lore into Lucas-supervised canon.

Tune in to the show and listen to our discussion, which ranges from the Jedi Order to the cool visual elements found in this episode.