Over at Buzzy Mag, there is a great review of Athena’s Daughters, the speculative fiction anthology featuring all female protagonists and produced by women.

Each story in this anthology not only meets those requirements, they don’t make being female in and of itself the reason for the story. Yes, there are some very strong women characters and we see how a female might handle a situation differently than her male counterpart. Not necessarily better or worse, just a different perspective on handling things at times.

There are quite a few stories that I would love to have young females and males, especially those on the brink of adulthood to read. I would want them to enjoy the diversity as much as the strengths. These stories span through time as well as space. From hard science fiction to the limits of the fantastic; 22 little gems. Some of course are not so little but the length of a story has little to do with enjoyment, unless you want to spend more time with some of the characters. Fortunately some of the stories are part of a writer’s universe already and we can visit them in novels and some are set to spin into a novel or a series on novels. 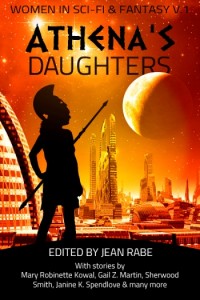 My story in the anthology “Mission Accomplished” ties into my space opera novel Wynde, which has another 4-star review at Amazon.

I also had a chance to talk about how Star Wars books drew me to reading different speculative fiction genres for the SF Signal Mind Meld. The cool part was seeing the Wynde cover featured with my bio!

I announced in July that artist Magali Villenueve was creating a character banner for promotional material to go along with the Fireheart Series. Star Wars fans will be familiar with her work from Star Wars Insider and recent RPG books. She also works on Game of Thrones, including the upcoming book World of Ice and Fire. Last year I interviewed her for the artwork she did to promote Razor’s Edge. The artwork is in my hands – some of you may have seen me raving on Twitter. I will be showing it off at GeekGirlCon next month. Seeing Vespa, Gemini, Badge, Nix and company come to life has been an amazing treat.