On this month’s episode of Fangirls Going Rogue, Teresa Delgado and Tricia Barr report back on their convention trips, including interviews with Steve Blum (Zeb) and Greg Ellis (Baron Ruhdor) from Star Wars Rebels. Plus we unveil a new logo courtesy of RebelForce Radio’s Jimmy Mac and artist Chris Amorim.

Listener emails always make us smile, and we’ve received even more mail this month from fanboys who love the show. Star Wars truly is for everyone! One email led to a discussion of ways to give back beyond the costuming fan organizations. Our suggestions include Force For the Cure and Cat Taber’s Games for Soldiers, which we highlighted in our first episode. 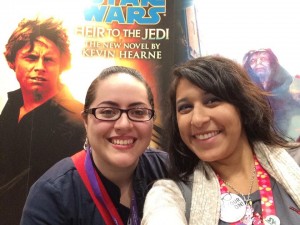 In addition to Teresa’s awesome interviews from Fanboy Expo with the voices of Zeb and Baron Ruhdor, Steve Blum and Greg Ellis, we did a written interview with Star Wars Rebels artist extraordinaire Amy Beth Christenson. She is a lifelong fangirl who was inspired to draw Star Wars by her aunt. We hope you’ll check out her full interview either at FANgirl or Jedi News. Amy Beth Christenson won the Judge’s Choice for the Her Universe San Diego Comic-Con Fashion Show, which was just released on Nerdist.com.

The closing character discussion was admittedly a bit of a lovefest, since it featured a favorite character for both hosts: Ahsoka Tano.

You can find Steve Blum and Greg Ellis on Twitter. Send them a tweet to let them know how much you love Star Wars Rebels and the interview.

Where to find us:

Please go like Rebel Force Radio on itunes and leave a positive review, and in your review mention how much you like Fangirls Going Rogue

Until next time: Yub Yub!