On the Wynde front, some fantastic reviews have been posted at Amazon. I’ll be highlighting more soon. The past couple of weeks I have been wrestling with Gemini’s short story tie-in to the novel, which will be published as part of Athena’s Daughters, a science fiction and fantasy anthology written and produced by women about women. Preorders are available at Silence in the Library. The story is similar in style to a fanfic novella I wrote called Splinters, where the plot swaps between two timelines with a common storyline thread that leads up to a great reveal at the end. The process can be a bit tricky, but I enjoy challenges.

I’ve previously discussed how the friendship and teamwork of Vespa and Gemini are an important part of the storytelling in the novel. A long-time friend, aurrasingrules from the TFN Fanfic forums, just completed Wynde and noted:

[Vespa] and Gemini were the true power couple of this book!

The fun part about this short story is it will shake up some preconceptions from the novel. Writing from tight POV allows me the ability to convince readers one thing is happening when maybe it’s not…

Melissa, known on Twitter as @JediLibrarian42, had fun tweeting as she read the book, including tweeting right at one of the character’s Twitter account. A couple of my favorites are below: 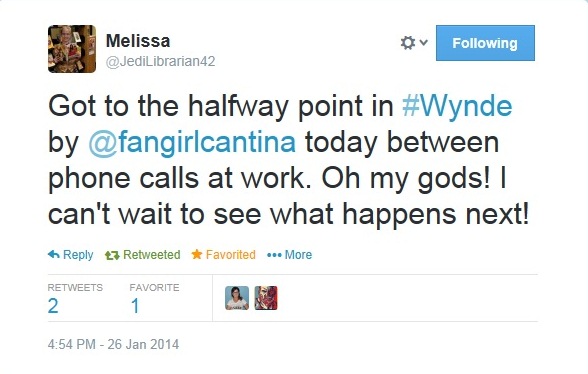 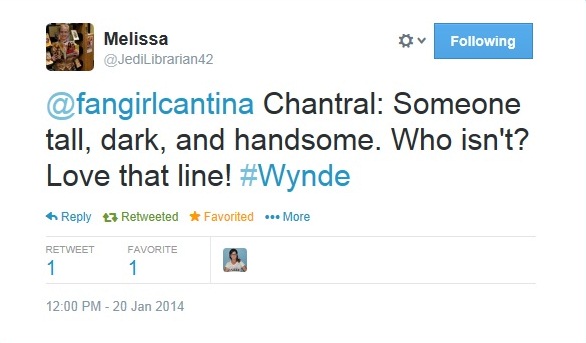 The “tall, dark and handsome” line obviously refers to the classic Disney prince. Over the course of the book, I had a lot of fun playing around with the fairy tale trope. In a particular scene that takes its inspiration from Cinderella, the chimes of a clock signal the end of Gemini’s time at a party. Gemini is not at the party to meet her true love, but rather to support her best friend Vespa. The stroke of midnight doesn’t take her back to a miserable existence, but rather her life as a warrior, a job that she is passionate about. Turning expectations on their heads was probably one of the most enjoyable parts of writing the book. It makes the story familiar, but modern and fresh. Or at least I hope that is how it comes off to the reader!

Melissa wrote a nice review over at The Ramblings of a Jedi Librarian. Here’s what she says about my characters:

The characters are well rounded, and I found myself really liking some of them. Vespa is a young woman with spirit, who in the face of imminent danger, doesn’t give in to fear. Instead she stands up and fights. She repeatedly cares more about saving those she loves than the danger to her own life. She’s a strong young woman fangirls of all ages can stand behind and cheer for. Gemini Reed, Vespa’s best friend, is another great character. I petite blonde (Yeah! We need more of those) who proves that big things come in small packages. She enlists in an elite military special forces group, Gemini takes part in the battle at the end of the novel, proving herself to be a formidable ally and opponent. She is a well rounded character, and like Vespa, a strong female character for fangirls to love. The male characters where equally great. Zephyr, Vespa’s childhood friend who cares for her a lot more than she realizes, I found myself rooting for him and hoping Vespa would give him a chance. Even Daemyn, Vespa’s overprotective father who is afraid of losing his daughter and expects a bit too much from his children, reminded me a bit of my own dad with his over protectiveness and I could totally relate to Vespa’s frustration with him (yet another plus when you can relate to a character or two). The most unique character was the AI Wisper, who has her own personality and role to play in the story.