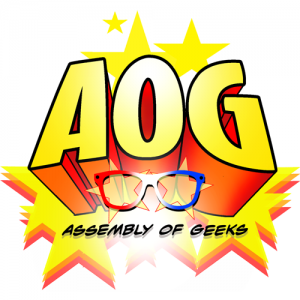 This past week on Assembly of Geeks, our Halloween episode considered darkness and death in storytelling. During my years as a blogger, and even before that, I have written volumes on the topic as it relates to Star Wars specifically, and also to other franchises.

George Lucas highlighted this to great effect in his recent discussion on the problem with business executives running Hollywood. They have no sense of what makes a story successful, and too frequently they choose to repeat the wrong element. Box office hits like The Empire Strikes Back and Nolan’s Batman series create a dynamic where the executives believe that darker and edgier is the secret ingredient, leading businesses to want to reproduce that magic. The sales on Star Wars: The Old Republic: Deceived and the Darth Bane series have been cited as reasons for more and more Star Wars Books leaning toward grimdark and the repeated hiring of their authors. The commercial failure of similarly dark Star Wars books gets handwaved. While Zack Snyder’s take on Superman has received truly mixed reception, Warner Brothers eagerly trotted him out as the director on several more DC Comics movies. Why does this happen? I talk about it a bit more in the podcast, but the crux of my thoughts on the matter is that people in power will tell the stories they want told, for as long as they can, until the point they no longer have a power base to support that endeavor.

The irony is that truly dark stories – those that include sex, violence, and despair, among others – can be told in a way that allows the audience to care about what happens. Cora Buhlert offered up some fantastic thoughts on the matter. As a blogger taking a longer-lens look at the trend toward grimdark in stories, it’s undeniable that the trend toward gritty realism is tied into the stranglehold taken by patriarchal vocal mindsets that have run roughshod over genre storytelling.

As storytellers like J.K. Rowling and Suzanne Collins soared up the bestseller lists, a divide was created in the industry perception of the value of what women read and what men read. According to the powers dominating the entertainment industry, young adult stories are presumptively lighter fare while “real’” speculative fiction aims to be more literary and realistic. Suzanne Collins manages to engage in social commentary on our own consumerism and voyeuristic nature in her stories, yet the biggest takeaway for entertainment industry is that “dark dystopian tales sell.” The lesson really to be learned from The Hunger Games is that a story about a woman struggling with the pressures of society, and then making her own choices, creates an impactful message about the audience’s real lives that is compelling storytelling. Stories such as Supernatural, Buffy the Vampire Slayer, Firefly, Once Upon A Time, and Sleepy Hollow – all of which are far from realistic – prove the success that can follow when storytellers get to make the decisions, and do so with a keen eye to their audience. Each of them thrives on a core demographic of women who engage in fanfiction artforms of all types, and each of those franchises prove that dark and compelling aren’t mutually exclusive. 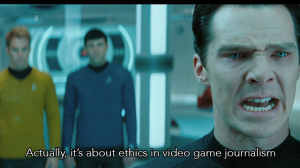 Scene from Man Pain Into Darkness

In A New Hope, George Lucas portrayed the slaughter of millions on Alderaan but only needed the expression of Princess Leia to tell the audience what the emotional cost was for his heroine. On the flip side, Luke Skywalker lost a mentor he had known for days and Princess Leia needed to console him. What that moment highlights for me is how much storytelling over the ages has convinced the audience that the pain of a man is worth so much more than a woman’s pain. That’s the narrative that has driven the storytelling market. Men perceive a loss that really isn’t tangible – women asking for less violent videogames, for instance, doesn’t hurt men – but they surely act like it’s the end of their world. Women experience dramatic wrongs as an audience – for example, taking an affirmative well-conceived female character like Doctor Carol Marcus and reducing her to a bra-wearing sop to the male gaze – then are forced to speak up about it vociferously just to get the entertainment complex to notice. 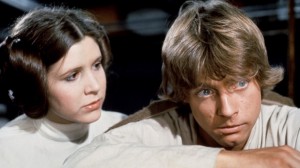 As a fan, I am heartened by the many recent little snippets from new Star Wars creators remembering what the franchise meant to them during their first experience with it. I have to hope trips into the Lucasfilm archives, like the new Marvel comic creators had a chance to do, will shake off some of the cynicism that has snuck into the prior iteration of the franchise’s storytellers. George Lucas mastered condensing our collective consciousness as human beings into movies that were inherently dark but gave us hope for our measly time spent on Earth. On FANgirl’s storytelling podcast Hyperspace Theories, we took a deep dive into his legacy. One topic included the things that make him a visionary, particularly his ability to tell a story that touches on the human condition, as well as the times when his storytelling became about what he, as king of a corporate empire, wanted to see. Lucas was far more successful and critically embraced when he leaned toward the visionary who told stories for the everyperson than when he was playing king. In the course of that discussion, it became obvious why Obi-Wan Kenobi won the fan vote in the StarWars.com March Madness Tournament. He is the character whose life could boil down to “life sucks and then you die” – but somehow Star Wars makes the audience believe that the universe would be a worse place without him.

For the rest of the discussion, please check out Assembly of Geeks!

Tricia Barr believes she is the agent of her own destiny, no matter how dark the future seems. For updates on all things FANgirl follow @FANgirlcantina on Twitter or like FANgirl Zone on Facebook. At times she tries the Tumblr.