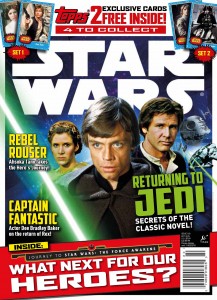 StarWars.com shares highlights from Star Wars Insider #160 out now on newsstands. Included is a piece I pitched on the Insider Panel at Celebration for my ongoing series on heroes’ journeys, and sometimes falls, in Star Wars. After pitching Ahsoka Tano, I admitted on the latest Hyperspace Theories that I struggled with the piece. My brain kept trying to write about the character’s champions, Dave Filoni and Ashley Eckstein, who are indelibly now part of the character’s lore. From the article:

The year 2009 proved exciting for female fans. The second season of The Clone Wars began to take a less disjointed approach to its storytelling and an arc began to emerge for Ahsoka Tano. Even better, it wasn’t just Ahsoka’s journey as a lone female in a sea of male characters, but she developed friendships with Senator Padmé Amidala and fellow Padawan Barriss Offee as well as an adversary in bounty hunter Aurra Sing. At the same time Eckstein, correctly perceiving a dramatic lack in geek-themed apparel targeted at the female fan, launched Her Universe. In my article on Han Solo earlier this year, I expressed my caution in considering an actor when critiquing a character’s heroic journey; it was Eckstein’s role in shaping Ahsoka’s story that began to change my opinion on that matter. It is simply impossible to separate the actress from the importance of the character.

Issue 159 featured Asajj Ventress. More exciting pieces are on the way. You can subscribe here or pick up this month’s issue at your local bookstore.