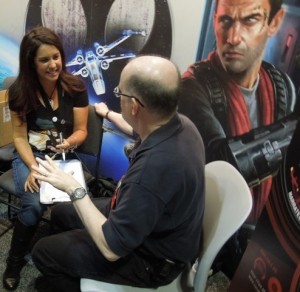 This week I appear on the podcast Game On Girl, a weekly podcast hosted by Regina McMenomy, Ph.D., and Rhonda Oglesby. While the show focuses on gaming culture and representation, my visit centered on fandom, the reasons behind franchises dismissing their female fans, and the importance of speaking up as fans and customers. We also talked about storytelling and smashing tropes, one of my favorite pastimes when working on my novels.

Speaking of Wynde, it did get a little air time, as did its main protagonist Vespa. She is a princess of sorts, perhaps a spoiled one. It’s what she does in the gravest hour of need for the people of her homeworld that turns the princess into a heroine.

The big discussion of the hour was on defining the term strong female character. Then we tackled how objectification and agency are separate issues when considering the portrayal of women in stories.

It was a fantastic conversation from start to finish. I look forward to meeting up with Regina and Rhonda at GeekGirlCon later this year. From the show notes for Episode 123:

Have we got a great show for you this week! Tricia Barr from FANgirl Blog joins us. We discuss Star Wars fandom, strong female characters, and writing. Check out the episode and let us know what you think in the comments.

You can find Game on Girl on iTunes or the RSS Feed!