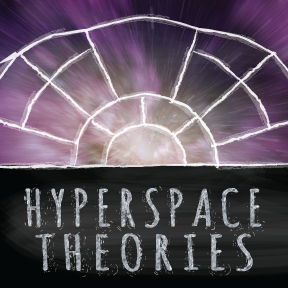 Today marks the release of the first episode of Hyperspace Theories, a new Star Wars podcast centered on speculation and storytelling in the galaxy far, far away. We plan to record our shows monthly, although we may release shows more frequently on occasion if we have more to say!

The regular co-hosts of Hyperspace Theories are Tricia Barr, my editor and storytelling collaborator B.J. Priester, and FANgirl contributor and longtime fandom pal Kay. For the first show, to introduce the podcast and our goals, we’ll cover all the discussion. In future episodes, we hope to have a guest join us for our conversation.

The creation of Hyperspace Theories was inspired by two of the most-hit posts at FANgirl: last summer’s Let the Speculation Begin! – Part One and Let The Speculation Begin! – Part Two: Context. Over the past year, we’ve learned a lot more official information about Star Wars Rebels, the legacy of The Clone Wars, and the status of the Expanded Universe stories and lore. We’ve also seen, of course, an increasing amount of rumors, leaks, and hints about Episode VII. Now that filming is well underway – in fact, the conclusion of principal photography is probably in sight – it’s only a matter of time before the lid of the Mystery Box cracks open… We also have Rebels in play, as well as the standalone movies, Episodes VIII and IX, upcoming novels and comics, and undoubtedly future story projects fans don’t even know about yet.

With all these little nuggets of information to consider, mull over, and analyze, Star Wars fans have more to speculate about than any time in the franchise’s recent experience.

Which is really how B.J., Kay, and I originally met – from a certain point of view. Back in the day, speculation and analysis were the coin of the realm in the Star Wars fanfiction community. Prior to Episodes II and III, and during the ongoing 19-book New Jedi Order novel series, fanficcers churned out two kinds of fics in massive quantities. One was the speculation fic: building from the existing canon stories to predict where the tale might go next. In 2002, for example, fanficcers told their speculative versions of how the Galactic Alliance might defeat the Yuuzhan Vong; in 2004, they imagine how the Jedi Purge could transpire. The other was the alternate-universe fic: picking a certain moment in the story and diverging the tale in a different direction. What would change if Jacen Solo, not Anakin, had died on Myrkr? What if Anakin had struck down Darth Sidious instead of Mace Windu in the Chancellor’s office confrontation? And thousands of other variations, canon-speculation and AU alike, that explored the numerous possibilities the basic elements of the existing stories presented. Now Star Wars is back to that same exciting moment for fans. Imaginations are churning with infinite variations of where Episode VII or Rebels might go.

Ultimately, we realized that the art of speculating and the art of storytelling are inextricably connected. When storytellers craft stories, they must consider all of the options – examining the pros and cons, strengths and weaknesses, of each possible direction for the characters and plot. There isn’t a “right” answer, sometimes not even a “better” answer, but thinking through the options carefully ensures a thoughtful story design. When fans speculate, we do the same thing – consider the narrative possibilities presented in the story, play out the alternatives, and then try to guess which ones the storytellers have chosen. Of course, that means thoughtful analytical speculation sometimes doesn’t correctly predict where the story actually goes. But that’s okay, because the fun of fanfic-style speculating isn’t trying to be right – it’s in learning the intricacies of plot, characterization, and story by thinking like a storyteller.

And that’s our goal with Hyperspace Theories: to share our speculations based on the evidence and inferences we have available, to learn a lot about storytelling along the way, and most of all to have a lot of fun with Star Wars.

In our inaugural episode, we begin by introducing ourselves and the goals of the podcast. In our discussion segments, we first talk about the stakeholders whose perspectives will shape the future of Star Wars stories, and how keeping their interests in mind can guide speculation on what choices are being made. Next we consider a key world-building element facing the Story Group and its storytellers: the Force, and how it will be portrayed in the movies and other media. Finally, we end with our short segment just for fun: the Plot Bunny Giveaway.

We hope you’ll give the episode a listen.