In a panel discussion called the “State of Female Justice,” Olivia Wilde shares insights as an actress in Hollywood who is now making the transition to producing. She speaks forthrightly about her experiences with the inequity in the entertainment business, including insight into a gender-swapped panel read of American Pie.

And it was so fascinating to be a part of this because, as the women took on these central roles — they had all the good lines, they had all the good laughs, all the great moments — the men who joined us to sit on stage started squirming rather uncomfortably and got really bored because they weren’t used to being the supporting cast.

It was fascinating to feel their discomfort [and] to discuss it with them afterward, when they said, “It’s boring to play the girl role!” And I said, “Yeah. Yeah. You think? Welcome to our world!”

Wilde emphasizes that all forms of media are created based on “demand” or “what people are asking for.” She encourages women to ask for what they want and “louder.” Considering this past week’s fandom discussion surrounding the reveal of the Star Wars Rebels cast, her words should serve as another reminder why it is important to speak up.

(via Women in Hollywood)

When searching for geek-appropriate images for Olivia Wilde – Disney’s Tron: Legacy, right? – it seemed promotional material was limited to the same backside pose. After my discussion of Sabine’s pose in her introductory art, I wanted to return to this topic. The Hawkeye Initiative has tackled the industry standard by placing male characters in the poses female characters are often put in. I doubt Kanan, Ezra, or Zeb – or Boba Fett – for that matter, were conceptually drawn for marketing purposes in a backside pose with a coy expression and holding a spray can. Sabine’s weapons are not visible. The question marketers and artists working on Star Wars should be asking is: Would I pose a male character like this? If not, then perhaps rethink it. From what I have seen, Sabine has inspired more fan art than any other character, with far fewer days in the public consciousness, and it’s been forward-facing renditions like this beauty. This is how fangirls want to see ourselves. 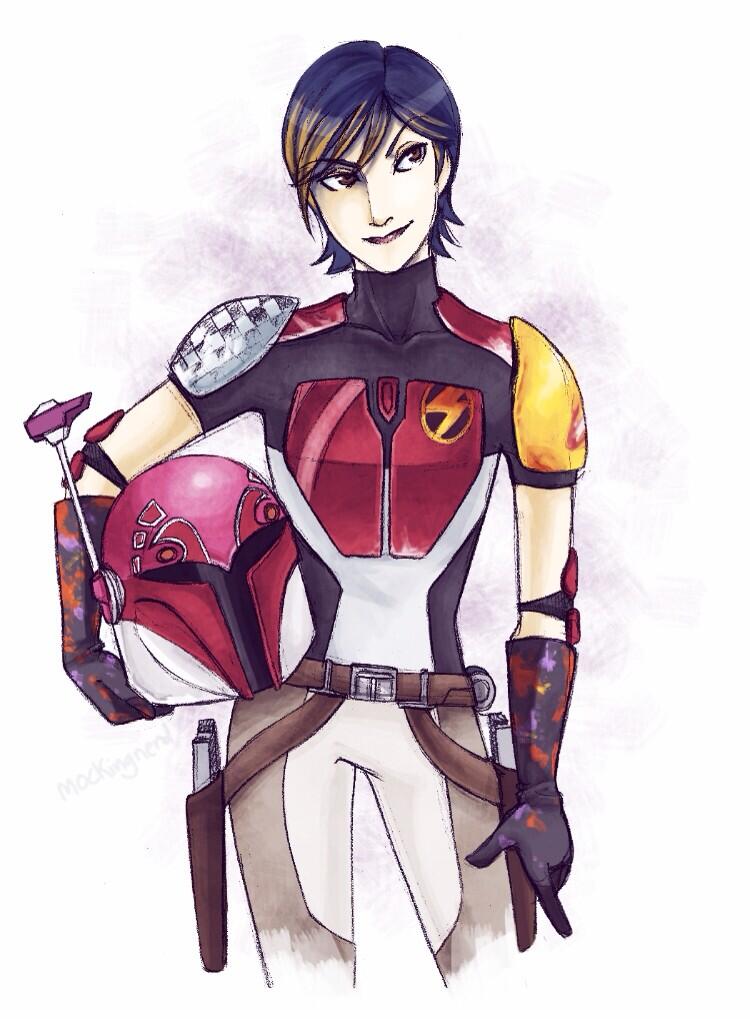